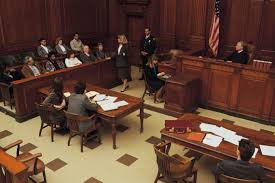 1000 grains of sand or one shining piece of sea glass? What would capture your attention when standing on the beach? This is the challenge of preparing exhibits for trial. You need the sand for the foundation of your case, but you also need that shining sea glass – that key exhibit that will you help seal the deal.

Many lawyers try cases that fill up boxes and boxes with documents. As a trial consultant, I help plaintiff and defense lawyers sift through their cases and test them out well before trial with focus groups and mock trials. Through this work, I’ve learned the following things about trial exhibits:

Winning exhibits shout out key themes and leave jurors with a clear conclusion about your case.

Sometimes the winning exhibit is just a piece of paper, to which nothing more is done except enlarging it for trial. For example, in the process of preparing a focus group for a plaintiff’s employment lawyer, I came across a document where the supervisor catalogued the plaintiff’s shortcomings in an email. I asked my client, “Why aren’t we using this?” My client said, “oh, THAT. I am going to file a motion in limine to try to keep that out of evidence.” He felt this document was too damaging to his client and felt the case would fare better without it. Since the whole point of a focus group is to test out all key aspects of a case, I suggested that we include it, just to see what would happen.

The mock jurors reviewed many documents at the focus group including this one. Lo and behold, not only did this document matter, but it was pivotal: Jurors read it and came to the unanimous conclusion that the supervisor was out to get the plaintiff; it was the smoking gun, proving discriminatory motive. Why? For one simple reason: The email was written after midnight. Jurors noticed this immediately and deemed it proof-positive of pretext. During their discussions, mock jurors jeered at the notion that a supervisor could be legitimately motivated to write a “counseling memo” in the wee hours after midnight. The plaintiff found his shining piece of sea glass and it happened to be a small but critical detail on one piece of paper.

No matter what the case, the subject matter, the simplicity or the complexity, you should always use a timeline. If I had $100 for every lawyer who called me on the eve of trial without a timeline, I’d be one more consultant using tired old clichés but I’d also be rich! And for every timeline that is actually used at trial, I’d be even richer if I had $100 for everyone that was overloaded with detail.

Time-lines are supposed to give jurors a road map and not a head-ache.

To avoid ruining your timeline with too much information, remind yourself that an effective timeline judiciously references only a few key events so jurors can look at it quickly and understand almost instantly what you are trying to establish. If a case spans many years and complex events, you might need more than one timeline. Then, jurors can understand the key events and themes for each critical time period and you can use a different demonstrative that puts all the puzzle pieces together.

There are exceptions to every rule and sometimes it does make sense to load up a time line with details, but only if those details help illustrate a particular point. For example, before and after.

When you use a time line to show underlying motives (discrimination, retaliation, under-staffing the job because of lost profit), visually depicting quantifiable details on a time line is incredibly effective. You can use easy visuals such as:

Working with a professional can help you ensure that your exhibit sends the right message. Too often, lawyers hire professionals to depict every last detail. If you hire a professional, you will get the most bang for your buck by expecting that professional to take your ideas, refine them and make them better.

Don’t spend the big bucks unless you know the exhibit will help you not hurt you.

Let’s take animation as an example because this is the one type of trial exhibit that can literally cost thousands and thousands of dollars. Some cases naturally lend themselves to animation but creating a costly animation without knowing how it will impact jurors can be a big mistake. For example, in a case involving allegations that a police officer used excessive force by shooting the driver of a car, an animation was created by a plaintiff’s attorney. The plaintiff’s attorney spent his own money because he thought the animation would clearly depict that the police officer was not in danger and shooting the driver was unreasonable. The lawyer made that same point with a diagram, showing that the police officer was off to an angle so that even if he stood still, the car would have missed him, and that he could have gotten out of the way. But the lawyer wanted this diagram to come to life, which is where the animation came into play.

By the time the lawyer conducted the mock trial, he had paid for all but the final tweaks on his prized piece of technology. When the animation was presented to mock jurors, they reacted opposite of what this attorney expected: By making the scene come alive, jurors were suddenly standing in the police officer’s shoes, with a moving car coming towards them. Now, the simple math of calculating an angle, which would have shown the officer was off to one side, was irrelevant. Instead, jurors saw a police officer in close proximity to a vehicle that was quickly moving closer and closer.

Upon learning that his animation actually hurt his case, the lawyer did the smart thing and decided not to use it and he was able to win his case. It is interesting to consider what would have happened if the defense had used the animation instead? The animation would have depicted the police officer’s location with a car moving towards him. The plaintiff knew that this was exactly what jurors needed to stand in the police officer’s shoes but the defense lawyers had no idea. The point is that when one side is working hard to develop and test out effective exhibits, the other side may be asleep at the switch.

Don’t be afraid to be your non-technological self.

In the rush to use technology for everything, some lawyers feel disadvantaged when their exhibits don’t have that glossy, computer-enhanced sheen. The key isn’t to focus on what everyone else is doing or to always use the latest and greatest technology. The answer lies in using exhibits that transform that look of confusion to a look of, “OH. Now I see.”

There is no shortage of examples where lawyers use nothing more than their bare hands, or paper and magic markers, to bring home their point. I worked with a lawyer who during a mock trial, tested out a home-made exhibit that worked like a charm. He took cardboard boxes, wrapped them in brown paper, attached wires to them, and used them to show jurors the simplicity of electrical concepts. It looked like a 6th grade science project and it made all the difference in whether jurors were able to understand his client’s case.

The beauty of this exhibit was that it sent the very important message to jurors that “this is NOT over your heads. You don’t need to be fooled by hired-gun experts. A simple cardboard box is all you need.” That was the perfect message in a case where plaintiff’s victory depended entirely on experts.

The rule for good exhibits is the same for any kind of communication during trial: You always have to remember who your audience is and give your audience the tools they need to truly understand – not just the facts, but the significance of those facts.

Keep in mind that winning one’s case is often a separate issue from having good trial exhibits. From my vantage point, I see two things all the time: First, too much money is spent on finished trial exhibits that aren’t tested out until a mock trial weeks before the trial date. The objective feedback from lay persons either requires more costly changes or causes lawyers to discard finished exhibits altogether. Second, too many lawyers commit themselves to a particular exhibit without ever getting the objective feedback they need to differentiates the sea glass from the thousand grains of sand.

So my advice to all practitioners who are trying to tell the right story with the right exhibits, test out your ideas early on and use that testing process to refine not only your exhibits but your case presentation as well. After all, exhibits are not only the nuts and bolts of your case, but they are the thematic blue print – giving jurors the big picture of what your case is really about.