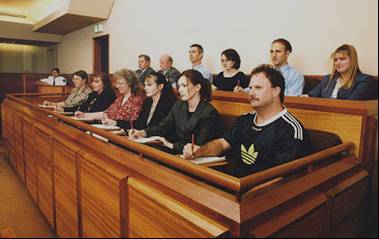 This article compares two high profile criminal cases: In one case, the judge and attorneys had no advance plan for jury selection. In the other case, a request for a written questionnaire was granted six months before the trial date.

High profile cases are usually longer than the average trial. It can be challenging and time-consuming for the court to find enough jurors who are free from overwhelming bias and who can also serve without experiencing substantial hardship. In my experience, the judges and attorneys working on these cases – though they put in hours and hours of work in case preparation, usually take no special steps to ensure that voir dire will be an efficient process capable of rooting out harmfully biased jurors.

What follows is a comparison of two high profile criminal cases: In one case, the judge and attorneys had no advance plan for jury selection. In the other case, a request for a written questionnaire was granted six months before the trial date.

This case involved a local murder that received substantial media coverage. The trial was anticipated to take approximately four weeks, long enough to pose significant hardships for a good number of jurors. No voir dire was submitted in writing until just a few days before the selection was to begin. The judge expected to start and finish jury selection in one day.

The only special steps taken by the judge was to make sure the selection was held in the largest courtroom, with the greatest number of jurors. This was the judge’s first mistake. Public speaking is supposedly one of the top five fears for the average person. Anyone who has to engage groups of people in meaningful discussion (professors, judges, attorneys) knows that the larger the group, the less likely people will participate.

The judge’s second mistake was addressing the hardship issue first. Jurors who were called into the courtroom had no idea until that very moment that this trial was going to be a long one. When they heard this, panic struck the room. The judge asked jurors to line up if they wanted to discuss a personal hardship. Jurors were told to line up and the judge heard each complaint at side bar – a time consuming process that kept all the other jurors in the dark. As these other jurors sat in the audience, waiting silently, more and more jurors joined the “hardship line.” As the hours ticked by, the line got longer and longer and the judge hadn’t even gotten to any of the substantive questions. The jury selection process went no where and at the end of the day, the case was postponed.

The second time around, the judge set aside three days for jury selection. This time the jurors were pre-screened for hardship. The room was filled with even more jurors – with a grand total of 302 on the list! The judge asked jurors if they had read about the case in the newspaper. Only a handful of jurors admitted that they formed an opinion. The judge asked if jurors would draw a negative influence if the defendant decided not to testify. Not a single juror raised his or her hand. By the third day, the judge eliminated 50 jurors and randomly selected 16 to sit in the box for the attorneys to exercise their challenges. Of those people in the box, the attorneys and the judge only heard testimony from less than half.

At that point, a juror in the audience nervously raised his hand and asked to speak to the judge. He came to the bench and said that one of the jurors seated in the box had said to him, “that guy [the defendant] is guilty!” Of course jurors were asked if they had drawn conclusions of guilt about the defendant but this juror did not speak up. Had this other juror not spoken up, the defendant would have been forced to try his case to a juror who had already decided his guilt. Chances are, that wasn’t the only juror who had believed the defendant was guilty but didn’t feel comfortable enough to come forward. The jury selection was not only inefficient, but it failed to flush out biased jurors.

Contrast that to the case where voir dire preparation began six months prior to the court date. It too was a high profile criminal case where jurors undoubtedly formed opinions about the defendant’s guilt. A 50 question questionnaire had been devised that took jurors no longer than 15 minutes to fill out. The case was anticipated to take two months to try so hardship was likely to be as serious an issue as biases.

Yet, only 155 jurors were called for this case. They received the questionnaire two months before the trial date. Jurors filled them out at home and mailed them back to the court. The attorneys had two weeks to cull through the questionnaires and weed out jurors who expressed their biases unequivocally, in writing. Attorneys from the opposing sides each prepared their list of “for cause” jurors and the judge made the final call. Without taking any court time at all, the list was culled down to 80 prospective jurors who’s answers might have required in-court follow-up, but weren’t so bad as to require out-and-out dismissal. The questionnaire also explained the importance of jury duty and the limited definition of hardship. Oddly enough, only a small number of jurors claimed hardship on the questionnaires.

In the first example, of approximately 300 jurors, only a handful expressed conclusions of the defendant’s guilt from what they read in the news, and only a handful admitted they would have a problem if the defendant chose not to testify. In the second example, among 155 jurors, more than half admitted biases that were deemed so serious that the judge agreed to strike them from the panel. Many of the jurors who were stricken admitted to more than just one bias, but to about 5-10 biases. For example, one question was:

Based on what you’ve read or heard in the news, have you formed any opinions or drawn any conclusions about the defendant’s innocence or guilt in this case? Yes___ No___. If yes, what opinions and/or conclusions have you drawn?

One juror answered, “that he is slimy and a criminal.” The follow up question was:

Would you be able to set aside your current opinion and base your verdict only on the law and evidence presented at the trial of this case? Yes___ No___. Please explain: “I consider his crimes to be of the highest offense. Perhaps all of what is being said is not true but I’m sure some of it is and I find his crime DISGUSTING!!

Additional questions were phrased as follows:

Do you believe that a defendant in a criminal trial should be required to testify? Yes___ No___ Please explain:

Do you believe that a criminal defendant who is also an elected public official should be required to testify? Yes____ No___ Please explain

Some jurors just checked off ‘yes” or “no” with no further explanation. But other jurors said things like, “It would lead me to believe he was hiding something.” “Required, no (under 5th Amendment) but should he? YES. He has another responsibility and that is to uphold the integrity of his office.” Q: Would you have any problem following those instructions? A: “No, but I still would be of the opinion that he SHOULD testify.”

This did not in any way compromise the court’s ability to timely select a jury. Within five hours, among the 80 jurors who were called to court, follow up was conducted for each one who gave questionable responses. Some were eliminated by the judge; others eliminated with peremptory challenges. Two were eliminated for hardship. The lawyers for both sides knew something about every prospective juror. Peremptories were exercised based on actual biases held by jurors – not their race, age, sex, or any other stereotypical or illegal criteria.

Whether a case is high-profile, or just long and complex, there is no reason for a jury selection to take days and days, or to fail to eradicate biases. In this era where juries are under increasing attack, we need to more regularly employ efficient jury selection techniques that maintain the integrity of our jury system and give meaning to the phrase, “a fair and impartial jury.”